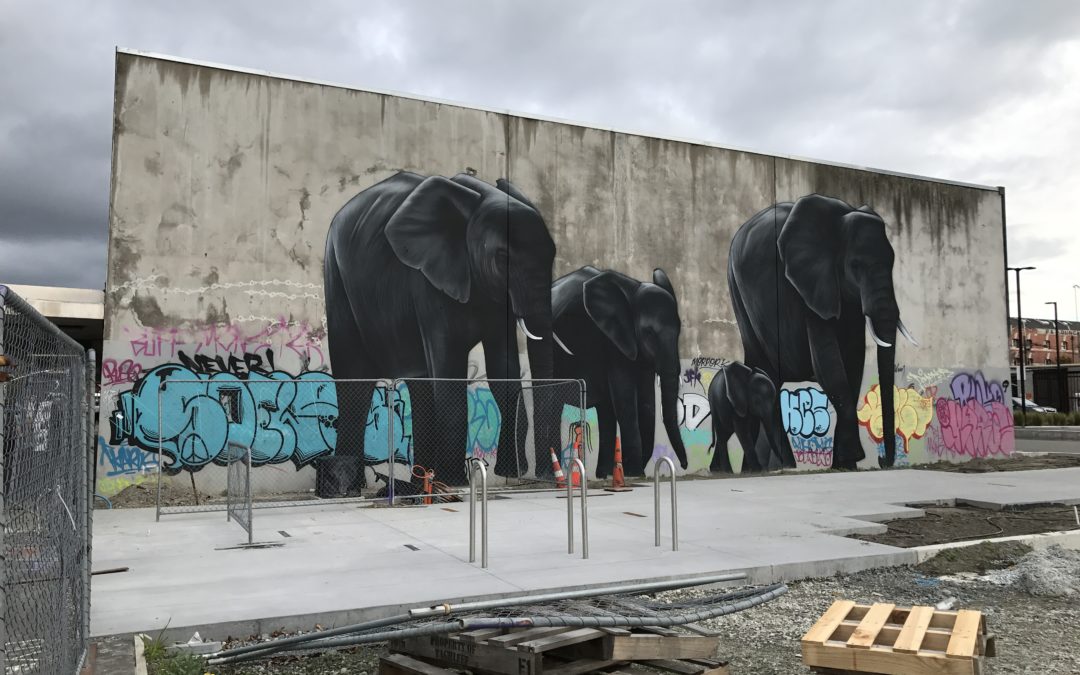 So here it is, the last post of my adventures, travelling alone, in New Zealand. If you missed Friday’s post be sure to go and check it out – and don’t forget to take a look at the rest too! The end of my trip consisted of me making my way from Queenstown up to Christchurch where I would then embark upon 4 flights to return back to the UK. Although I had effectively been travelling alone in New Zealand, I had been with the same group on my Kiwi bus from Auckland all the way down to Queenstown so really I hadn’t been ‘alone’. Therefore travelling alone up to Christchurch was a bit different but I guess some what nice to have my own time to explore some new places before I headed home.

My bus headed out of Queenstown pretty early so I said most of my goodbyes the night before, but a couple of people came to wave me off in the morning which was a nice surprise. I was travelling up to Lake Tekapo for the night and on the way we stopped at various places, one of which being an extremely blue lake, Lake Pukaki. Surprisingly, it was another location where Lord of the Rings was filmed. The lake front was covered in huge rocks and boulders which acted as a perfect seat to sit, eat some food and take in the surroundings. I have to say, I don’t think I’ve ever been to such a beautifully diverse country as New Zealand, I could never get over the views. No matter where I was there was always something amazing to look at and explore.

We carried on our route to Lake Tekapo, on the way stopping at one of the most photographed buildings in New Zealand (so I’m told),the Church of the Good Shepherd. So we stopped to go and take some more photos and have another explore. The rest of the day/night at Lake Tekapo was very relaxed. The lounge area of the hostel had huge ceiling to floor windows facing the lake so I managed to find a good view to work in front of for the rest of the day and then in the evening we ended up having a bit of a movie night in the hostel. Unfortunately I didn’t have much time to explore in the morning because our schedule meant we had to leave somewhat early.

Eventually I found myself at my last stop of the trip; Christchurch. There was an interesting mix of thoughts when I arrived in Christchurch; for one I was excited to explore a new place and Christchurch was definitely an interesting place but at the same time it was a bit sad because now my trip was coming to it’s end.

As many of you may know, there were some awful earthquakes in Christchurch in 2011 and 2016 that completely destroyed the city, and it’s still repairing and rebuilding itself now. So walking around there’e still a lot of destruction and collapsed buildings. We were given a bit of background on our way into Christchurch which gave me a bit more perspective on the situation.

Due to the fact I wasn’t going to be in Christchurch for very long, I decided to explore the city by foot and just wander around. As I made my way to the city center I found a place called Re:START, which was a shopping mall (or center) made solely out of shipping containers. It was full of pop ups, clothes shops, food stalls, art places, all sorts. There was a completely different energy there, music playing, people meandering around. If you ever find yourself in Christchurch, definitely go and check it out. After strolling around the city, I found myself once again at Pak’nSave. It would be my last time at the wonderful place so I savoured my time there as I found something to eat for dinner and some snacks for my journeys the next day. My last day in New Zealand ended up having a much earlier start than I had anticipated, but because of some changes in flights I was up at 4am and on my way to the first of many airports I needed to be at for the next 36 hours or so.

As you can tell the last few days were at a much slower pace then perhaps the rest of my trip, but it was nice to have the opportunity to really take it all in. I definitely did not want to leave and how to return in the near future. I would 100% encourage you to visit New Zealand, I promise you you will not regret it – and if you have been let us know what you thought, we’d love to hear your stories!

To find out more about travelling alone and what it’s like living as digital nomads, click here, and be sure to keep up with all of our current adventures on social media (links are all at the top of the page!).

See you on my next adventure!
Ella