Be a Nomad Traveller | Wanaka, NZ 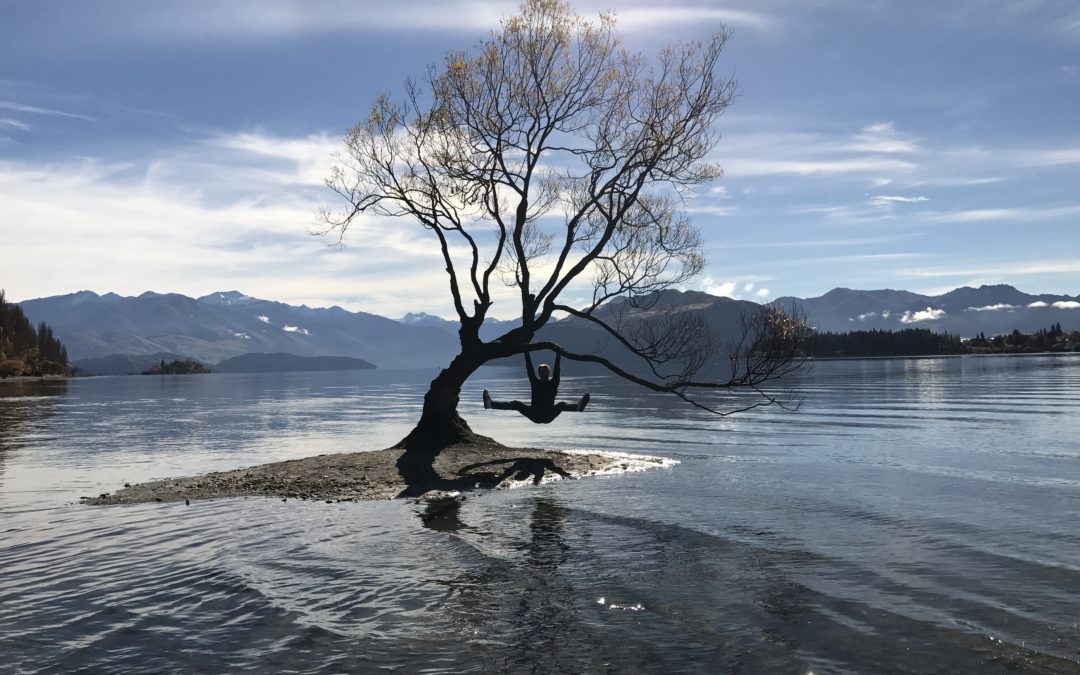 Be a Nomad Traveller

Being a nomad traveller, sounds like a dream really doesn’t it? For me it was. From a young age, I’ve always loved travelling and I’ve always loved exploring new places and being a nomad traveller and living the digital nomad lifestyle, I get to do just that. If you’d like to find out more about joining digital nomads and get access to a FREE video series, click here.

On our way down from Franz, we made a few stops (as always with the Kiwi bus – it was a way to give us and the drivers a break from some long drives), one of which was Lake Matheson. The lake is famous for it’s reflected views of Mount Cook and Mount Tasman. In order to get to the lake we had to wander through forests for about 30 minutes around some windy tracks. Eventually we reached a large jetty, made our way to the lake front and looked up. It was a pretty overcast day but even still the views were breathtaking. The lake is extremely dark which allows it to reflect the amazing views, the colour, I was told, was caused by the leaching of organic matter from the surrounding forest floor. It may not sound pleasant but it creates something spectacular. 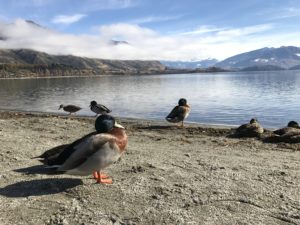 We then carried on South to Wanaka. People along the way had said a lot of things about Wanaka and once we arrived I could understand why. It’s only a small town on the lake front but it sure does make an impact. As soon as we arrived we had decided we wanted to stay an extra night then we already had planned and then headed down to a bar on the lake front to have some beers as we watched the sun set. It had a similar feeling to Taupo but even more relaxed, everyone was so easy going, no one was in a rush, just super chilled out. if I’m honest it’s exactly what I wanted at this point in the trip, we were able to stop and slow down the fast pace and just simply enjoy the atmosphere and the stunning views.

The next day we just spent wandering around seeing what was what. We decided to walk around the lake, making friends with some ducks – when I say some, I mean a lot – and skipping stones, being sure to avoid all the ducks. We slowly strolled around before we made it to ‘That Wanaka Tree’ (that’s the location tag on Instagram, if you don’t believe me take a look) and of course we took more photos than probably necessary. Apparently this tree was a bigger deal than we realised considering the amount of wedding photos that were being taken in front of it, but again you can probably see that on Instagram too.

For our last night in Wanaka we decided to do something ‘special’ mainly because it was our last stop altogether before Queenstown, where we would say our goodbyes. So, we decided to hike Mount Iron and watch the sunset at the summit. We’d been told it was about a 30 minute hike from the base of the mountain and we were about a 30 minute walk from the base and our timing wasn’t great on this occasion. We made it there with about 20 minutes to to do the hike and so we sped our way up. We hadn’t anticipated how warm it was actually going to be, it was going into Winter after all, and we never quite made it to the top because the sun was beginning to set so we stopped just before. Despite all of the faff on the way up, it was definitely worth it. It was absolutely stunning, we were lucky it was a relatively clear night with just a few clouds. Definitely something to remember.

So there we go, a brief introduction to Wanaka. I was in Queenstown for longer than any other place and it was pretty eventuful so be sure to keep your eyes peeled for that post on Monday!

If you missed out on last Monday’s post then click here to find out more about hiking a glacier and Franz Josef. 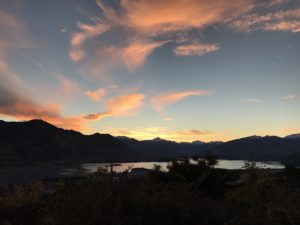 Until next time,
Ella